John Lennon In His Life Book 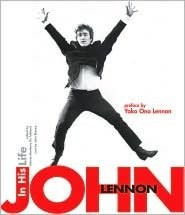 John Lennon In His Life Book

John Lennon is a legend in the history of popular culture, the primary impetus and creative force behind the world’s most beloved and influential rock band, an iconoclastic personality who epitomized the explosiveness of his times, an inspiration to millions of adoring fans, and a musical genius who wrote dozens of timeless songs before his life was tragically cut short in 1980.

This photographic biography of the Fab Four’s enigmatic leader is dedicated to his artistic career, which began in Liverpool in 1962, and also to his life, which was marked by restless exploration—into art and music, consciousness and spirituality, politics and protest, love and peace.

Featuring family photos and reproductions of documents that bear witness to momentous events and the origins of his "Imaginative" songs, this compilation, like no other, sheds light on his relationships with Paul, George, and Ringo; his attitudes toward mind-expanding drugs, social revolution, and the Vietnam War; the cataclysmic breakup of the Beatles; and the tenderness of his love for Yoko Ono and their only child together Sean.

TITLE: John Lennon:  In His Life