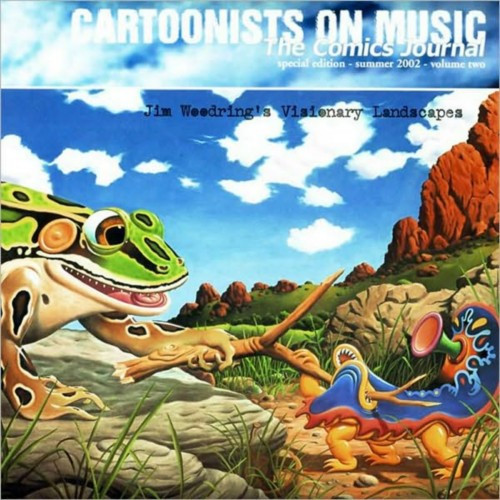 The Comics Journal has, for 25 years, reigned as the world's premier magazine covering the art of comics. With its fiercely independent editorial stance and its unashamedly high-falutin' aesthetic standards, the Journal has been the recipient of numerous awards and libel suits over the last quarter century. Its interview subjects reads like a Who's Who of the car... tooning profession from Jules Feiffer and Ralph Steadman to R. Crumb and Art Spiegelman.

Twice a year the Journal is published in a special "coffee table" edition, a cross between a magazine and an art book, combining the magazine's patented journalistic and scholarly features like wide-ranging interviews, iconoclastic criticism, and scholarly essays with new comic strips by the most innovative cartoonists working today.

The 2002 Summer Special spotlights master cartoonist Jim Woodring with a spectacular cover painting, two essays on the artist's oeuvre by Donald Phelps and Kenneth Smith, and an interview. Text-and-art features include an appreciation of the cartoonist W.E. Hill by Zippy-creator Bill Griffith (with many examples of Hill's gorgeous tabloid-sized Sunday pages) and an expansive appreciation of Jack Kent's King Aroo strip.

Our comics section's theme this volume is "Cartoonists on Music and Musicians" and we expect many of last volume's contributors which included R. Crumb, Charles Burns, Mary Fleener, Jaime Hernandez, Gilbert Hernandez, Megan Kelso, Tony Millionaire, Dave Cooper, and Art Spiegelman to be back, as well as a few new names and faces. Black-and-white illustrations throughout; 60 pages in full color.